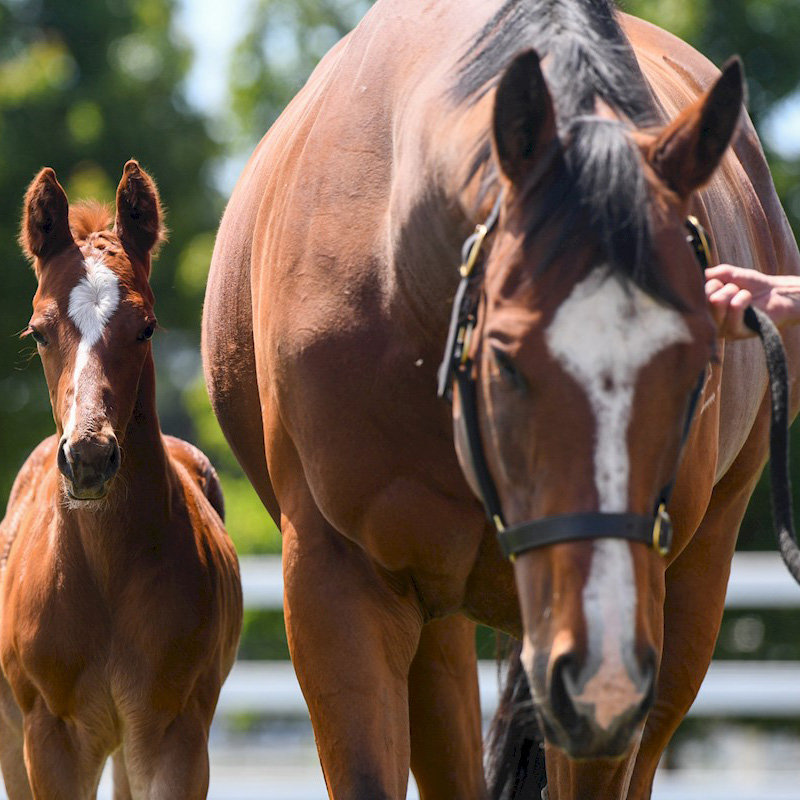 Don’t wait until spring……tailor your mare’s nutrition now for a sound, healthy foal

It’s hard to imagine (as we are cooped up in the depths of winter) that before we know it, the sun will be shining and our foal we’ve been waiting for will be here! Your prized racehorse has retired, you’ve selected the most suitable stallion, she is in foal, and now the waiting game is on. It’s easy to think that most of the hard work has been done, however a healthy mare and foal doesn’t happen by chance. Now is the time to ensure they’re getting some vital nutritional care so that the foal can be given the best chance to grow sound and strong.

Your newly pregnant mare doesn’t have a huge change in her nutrient requirements because the growing foal is incredibly tiny. Provided her diet is nutritionally balanced and she is maintaining her body weight, you can keep her on her usual diet. It is a mistake to start ‘feeding for two’ as soon as she’s in foal – this will likely result in a fat mare and associated health issues. Often newly pregnant mares on good pasture and hay can manage very well on a low intake vitamin and mineral supplement such as Barastoc KER Stud Balancer.

Pregnant mares have increased energy (calorie) needs from about six months of gestation through to birth. Mares will usually gain 12-15% of their body weight during pregnancy, most of which will occur in late gestation (nine to eleven months). By the last month of pregnancy, an average mare will consume roughly 20-22% more calories over maintenance needs.

Mares that are too thin throughout pregnancy may have a prolonged gestation period and have depleted nutrient stores. For mares that require the extra calories, a higher intake breeding feed such as Barastoc Breed N Grow should be fed along with high quality roughage. Thinner mares would benefit from the addition of highly digestible fibre sources such as Fibre Beet or Speedi-Beet.

Protein and mineral requirements increase in late pregnancy. This is because the tissue of the foal that is growing during this time is quite high in protein, calcium and phosphorus. Trace mineral supplementation is also very important during this period because this is the key period in which the foal stores iron, zinc, copper, and manganese in its liver for use during the first few months after it is born. The foal has developed this nutritional strategy of storing trace minerals during pregnancy because mare’s milk is quite low in these elements. Mares in late pregnancy are often overfed energy in an attempt to supply adequate protein and minerals to the developing foal. If the pregnant mare becomes fat during late pregnancy, she should be switched to a feed that is more concentrated in protein and minerals so that less can be fed per day (Barastoc KER Stud Balancer is recommended). This will restrict her energy intake while ensuring that she receives adequate quantities of other key nutrients.

Over the years nutrition researchers have identified a few key nutrients which should be considered with feeding your pregnant mare, one of which is natural vitamin E. Mares supplemented with natural vitamin E prior to foaling had boosted levels of infection-fighting proteins called immunoglobulins. Natural vitamin E is 5 times more bioavailable than synthetic forms of E, so make sure you read the label on the feed bag! Natural E is d-alpha tocopherol, synthetic is dl-alpha tocopherol. It goes without saying that all Barastoc breeding feeds contain Natural Vitamin E, making Barastoc Breed N Grow the perfect choice for your broodmares.

As with all class of horse, pregnant mares are not immune to gastric disturbance. However, as many of the common gastric ulcer medications are not fully evaluated for pregnancy, prevention is better than cure. These measures include access to plenty of forage, minimising environmental stress, and avoiding high-starch and high-sugar feed. Use of a research-proven digestive supplement as part of an overall management program can support both foregut and hindgut health. One such supplement is the prebiotic Diamond V XPC. Research proven to support gut health, boosting digestion and improving immunity – Barastoc Breeding feeds are fortified with Diamond V XPC.

Mares with foal at foot

Once your foal is on the ground, the well-fed mare will provide them with all vital nutrition through their milk. Mare’s feed requirements will increase significantly during lactation, often requiring 3 times as much feed than in early pregnancy. Feeding high quality forage and a full breeding feed is a good idea during this important phase, unless the mare is a good-doer in which case a balancer should meet requirements without the calories.

Foals will nurse very frequently in the early weeks and begin to nibble on grass and their mother’s feed within a few weeks. The difference between what the foal needs and what the mare’s milk provides will occur around 3 months of age, so at this stage it is a good idea to introduce the foal’s own feed. Depending on the body condition of the foal and the grass available, this could be as little as a small about of a balancer pellet, such as Barastoc KER Stud Balancer, or a small meal of a full breeding feed such as Breed N Grow.

After weaning, it is common practice to turn foals out for a length of time to grow on and mature. Please don’t forget about their nutrition during this time – the period between weaning and 12-18 months is a really significant window for the onset of several developmental diseases affecting bone and joint development, which can go on and hinder their future soundness. Nutrition, especially deficiencies and imbalances, have a role to play in the onset of these diseases. Weanlings, even when turned out, still need a balanced feed or supplement on a daily basis to give them the best possible chance of growing strong, sound bones and joints.