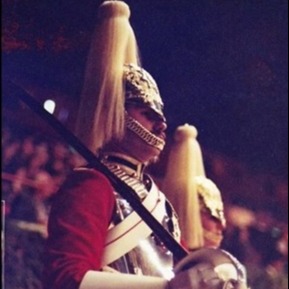 I grew up in rural Kenya in a very horsey community. Dad was the local large animal vet so there was always plenty of access to farm horses. I had my first fall off my mother’s retired police horse at the tender age of 3 whilst attempting a stand up trick. I came through pony club and then started playing polo before leaving Kenya and heading off to UK to join the British Army. I ended up in the guards division and after a bit of time with the infantry I managed to get a berth on the horses on ceremonial duties In London. I rode in multiple Queens’s birthday parades, and escorted the Queen on many Royal occasions. Highlight was riding in the Sovereigns escort for the Prince Charles Lady Diana wedding and escorting the crown jewels on horseback to the state opening of parliament. I now work in the Ridley safety team so somewhere along the way I must have learned something about risk taking behaviours following that fall as a three year old.