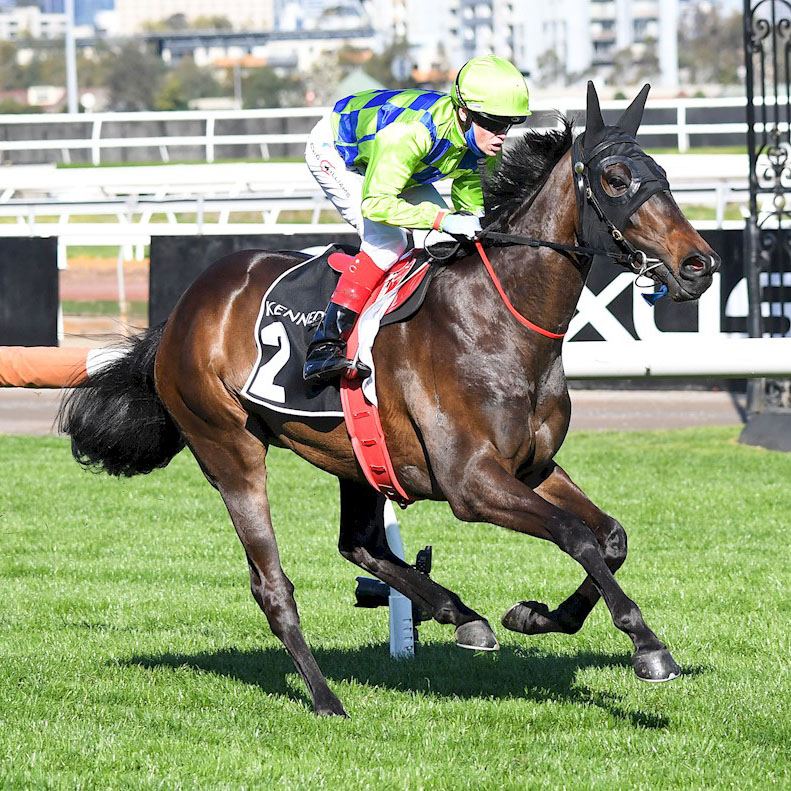 In many ways, training racehorses is like gardening. You start with the raw seed, you prepare the ground, you nurture, you cultivate, and you feed, aiming to bloom at the right time on the right day.

And with that in mind, Barb Raider is a fine advert for the training skills of Jerome Hunter.

The three-year-old started her last campaign on February 22 and ended nearly five months later having won three times at Group level, finished a gallant second in the Group 1 Australasian Oaks and racing in four states in a preparation consisting of seven races, all at group level and never finishing worse than second.

Hunter is pragmatic about his filly’s performance. “For me, I train to the horse, irrespective of ability” he says modestly. “With Barb Raider, she always looked great, she always ate and the races were there for her so that’s why she had what was to some people an extended preparation.”

“I would not have campaigned her the way I did had I not thought she was physically up to it but her performances tell you that she was and she came within a length of victory in two Group Classic races.”

“She’s come through it all in good order,” Hunter said this week. “At this stage I’m not planning a big spring campaign for her, only a couple of races as really want her next autumn as a mature four-year-old, that’s what I’m looking forward to.”

The best runner by the late Victoria Derby winner Rebel Raider, Barb Raider is a great granddaughter of the champion sire Zabeel, himself a son of the great Sir Tristram, and is raced by her breeder Graeme Gathercole.

Hunter has been the private trainer for Graeme and Barbara Gathercole at a bespoke complex on the Mornington Peninsula since 2012 and prior to his success this season had already enjoyed stakes success with Warrior Of Fire in the 2015 Hobart Guineas and Belwazi in the 2019 Kensington Stakes at Flemington but his results this season have gone to another level.

“I’m very lucky really, Graeme loves the breeding side of things and he does all that and leaves the training to me. If it all goes according to plan I get around 20 to 30 new yearlings a year to train,” Hunter explains.

Indeed, Barb Raider’s dam was bred and raced by the Gathercole’s and trained by Hunter to win her maiden over 1200 metres at Corowa from six starts. Barb Raider is her first foal and she is due to foal this season to another Victoria Derby winner in Prized Icon.

Hunter’s talent is not restricted to homebreds however, and his keen eye fell upon a colt at the 2021 Melbourne Premier Yearling Sale, Gathercole backing his trainers judgement to the tune of $200,000 to secure a colt by Snitzel’s group winning son Thronum, the most expensive yearling to date for his sire.

Victory in the $150,000 Next Generation Sprinters Final at Flemington earlier this month has Hunter thinking of bigger races, but as ever, he is measured in his assessment. “He is built for speed so I will keep him in sprint races. He will go up against horses going to the big races in the spring,” he said. “The best part is he’s still got a lot more to learn. Once the penny drops, I think we’ve got quite a nice horse.”

Thron Bone won his races on consecutive weeks, no mean feat for a two-year-old. “For the horse to back up like that, it’s great credit to the staff and also Graeme and Barbara. They let me choose where I want to have the horses. Graeme said it was up to me whether I backed him up, if I thought he was ready to go and I appreciate that too,” Hunter said.

Another integral part of the Graebar success is his feeding and Hunter uses Synergy for his horses. “It’s a broad concentrate and the horses love it. They do so well on it - if I get a blood picture back that is poor I know it is something like a virus as the feed is so good and that assessment is always spot on - if they are off it’s an illness or something like that, it’s not due to nutrition.

“I’m very happy with it (Synergy) and wouldn’t change it for the world.”