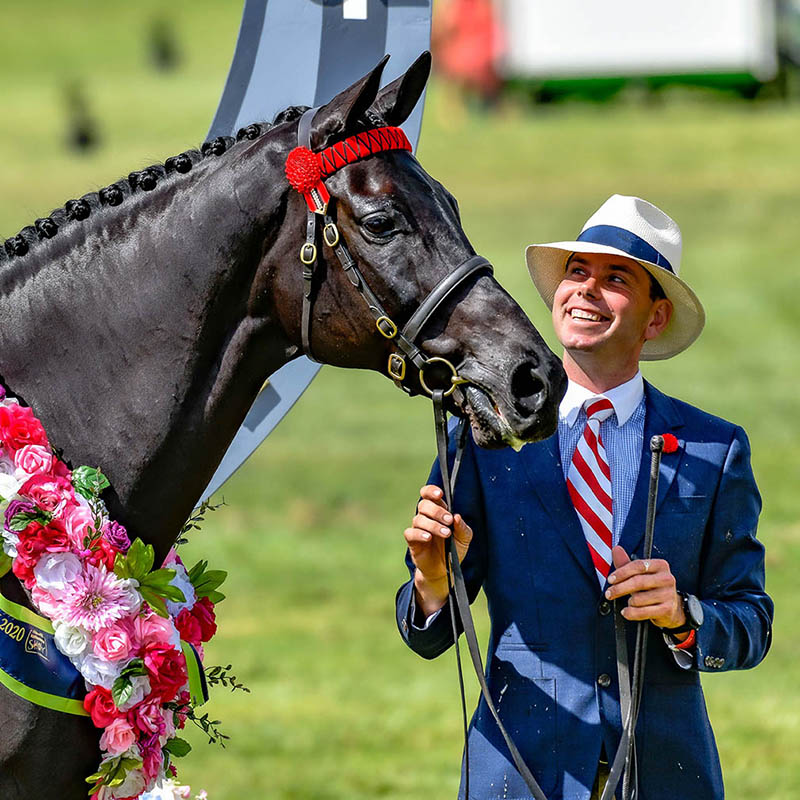 Based at Romsey Park in Victoria, Greg Mickan and Terry Van Heythuysen have an impressive team of horses and are regulars at all the major show horse events around the country.

As 2019 came to a close, the team competed at the Australasian Showhorse & Rider Championships with success. Highlights for the team included Greg riding Jillian Goldsmith’s Highgrove In Your Dreams to reserve champion in the Small Galloway class, and Emily Murray’s Riegal Manolete to third in the Small Show Hunter Galloway. Greg was just a point off placing in the Large Galloway class with Fiona Kittson-Walsh’s Smartini, and the same with BC Finesse, also owned by Fiona, in the Small Hack class. Talk about consistency!

However, one of the biggest thrills for the team was Stephanie Barrington riding her own Rebelle to victory in the Small Show Hunter Hack; Steph and Rebelle are part of the Romsey Park team and train with Greg and Terry. The pair were also third in the Senior Rider class. Greg and the team were very pleased with their results. “All of our horses worked incredibly well and couldn’t have done any more,” says Greg.

Many years spent in the showing world means the Romsey Park team have a thorough understanding of what it takes to produce a champion, and the work begins many, many months before a competition.

Greg explains that preparation for the show season begins during the winter. The team are brought in at the beginning of June, and are gradually prepared through the winter for the show season ahead. “Those first few months really just consist of getting their fitness up and getting them conditioned. We do a lot of riding out during the winter, down the roads and up over the hills… just fitness work and building their muscle tone. That’s the most important thing with show horses; we like ours to look like toned athletes, rather than just fat,” explains Greg.

Once the horses are in full work, they are generally ridden four or five days per week. These days might include work on the lunge, a few days in the school, a ride hacking out, and then another day in the school. “We try to break their work up as much as we can so they stay interested, and we as riders stay interested!” says Greg.

“You want them to look happy, that’s the biggest thing for us. We want them to prick their ears and look like they are enjoying themselves when they are in the ring. So I think to alternate their work is really beneficial rather than just schooling them. We mix it up and when they hit the ring, they are bright!”

Greg believes the work they are given is the main factor that contributes to how a show horse ends up looking when a big show rolls around, however, feeding is also high on the list. “Ours live on Barastoc Breed N Grow and Barastoc Groom… they have their Groom every night for coat health,” says Greg, who is a Barastoc ambassador. “To top them up if I think they need more, we use Barastoc Complete Performer. We only really use those three basic ingredients to get our horses looking good. The simpler you can feed, the easier it is… and we’re happy with the results we’re getting!”

As a big show approaches, the program starts to get a little more specific. Two weeks out they are shod, so their feet are nice and neat — while leaving a little bit of leeway if something doesn’t quite go to plan. If the team is competing on a weekend (and assuming it’s a Victorian show where considerable travel isn’t required), most of the competing horses will have the Wednesday off and are then worked the next couple of days leading into the show. Of course, it does depend on the horse and some need a little more work than others.

While the horses have the Wednesday off, Greg, Terry and the team are hard at work as they use this day to trim them up, pull their tails and ensure the horses are generally neat and clean.

The night before leaving for a show, the team sit down and create a plan of attack — something that’s essential when there are six horses in action on one day as they had at the 2019 Nationals.

“We’ll sit down and plot out each horse’s work and what they need to happen before they get into the ring. Often it’s an early start. Between Terry, myself and the owners, we’ll start working them down and I’ll ride as well, and then between us we’ll hose and wash off. One of our owners did all the plaiting for us at the Nationals,” explains Greg. It’s a common theme for the Romsey Park team — the owners are passionate about the sport and are very involved in the practical side of preparing their horses for the ring.

Once the show is over, it doesn’t stop there. Always planning ahead to the next event Greg explains that all the show tack, show rugs, boots and clothing is cleaned the day after and put away for next time — which in this case is Barastoc Horse of the Year Show in February.

Much like any other athlete, a lot of time and effort goes on behind the scenes for those few moments of glory. There may be months of preparation involved in getting a horse ready for a short warm-up and that three-minute workout before the judges — however, to see that beautiful finished picture is worth everything to Greg and the team!

1. Preparation is key. Greg explains that it’s critical to have a schedule leading into a major show, to ensure that everything is organised and nothing is missed.

2. Focus on the controllable. Over the years Greg has learnt that it’s important to focus on yourself and not get distracted. “Worry about your own horses and focus on what you can control, not what you can’t,” he says.

3. There’s no substitution for good fitness and nutrition. Greg explains that getting your horse fit and toned is the best thing you can do for their appearance, followed closely by good nutrition. No amount of make-up and false tails can replace the basics!