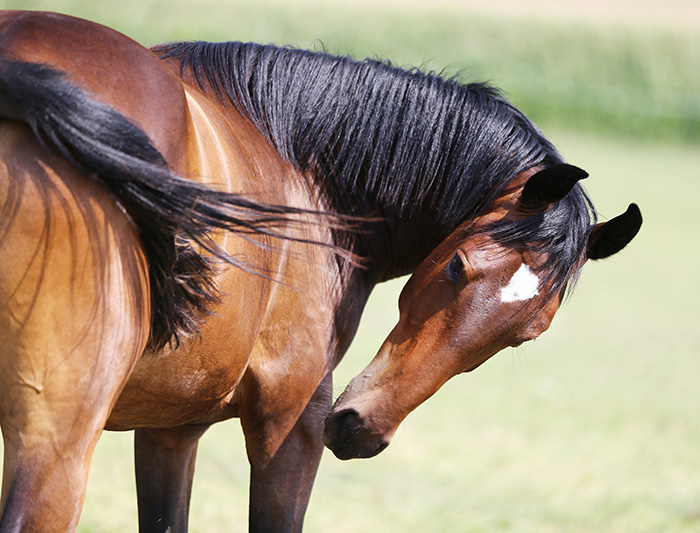 Fibre-Beet and Ulcers - an Update

A previous article, Ulceration of the horse’s digestive tract, discussed the role of fibre in the diet and how it has a role in combating acid driven perforation of both the stomach and the gut linings.

Since then there has been additional information that may explain why Fibre-Beet has been perceived to help in the control of EGUS.

Primarily it was shown that the pectic substances, and emulsifiers present in Fibre-Beet were substances found in proprietary brands and the main ingredients – beet pulp and alfalfa – had the ability to soak up excess stomach acid.

Ulceration: The stomach of the horse has two areas separated by the margo plitacus. The first section is the squamous mucosa and represents the non-glandular portion. It is identical to the lower oesphagus (gullet). The second section, the glandular mucosa, is sub-divided into three and it is the second section – the fundus – that has all the glandular activity.

The parietal cells of the fundus produce the acid secretions, others such as zymogen cells releasing pepsinogen, and goblet cells releasing mucin. As such it is the glandular portion that has a protective layer of mucilage which protects it against acid burning.

In the normal course of events the majority of stomach acids occur in the squamous mucosa – as this is unprotected and it is usually associated with acid reflux that may be caused by a number of factors, including exercise.

However, an estimated 20% of gastric ulcers occur in the glandular portion and these are the result of microbial invasion of the stomach lining where mucus barriers are compromised. This is the result of a number of factors, including feeding regime, stress and insufficient fibre.

Occurrence: There are distinct differences between foals and yearlings/adults when it comes to ulcers. In foals most ulcers are sub-clinical and squamous, although they tend to show more glandular ulcers compared to adults. They also can suffer from perforations and peritonitis and pyloric stricture resulting in delaying gastric emptying. Adults tend not get these latter.

In both cases the use of non-steroid anti-inflammatory drugs (NSAID) can suppress mucin production and so weaken the protective stomach linings.

Clinical signs of ulcers include:

Diagnosis: Gastric entubation – gastroscopy – is the major diagnostic tool and leads to quantification of the symptoms;

Treatment: Based on prognosis there are a number of treatments:

1. Proton pump blockers, eg, omeprazole (Gastroguard and Ulcerguard) 1. Inhibit the H+-K+ ATPase pump on the parietal cell. Reducing H+ extrusion into the lumen of the stomach. Very effective at lowering gastric pH for 24 hours with a single dose 2. For clinical disease: 4 mg/kg orally, once daily for 4 weeks

3. For prophylaxis (eg, before an intense race/show season): 1‒2 mg/kg orally, once daily during the season

1. Diet modifications a. Feed more frequently. Less meal style feedings b. Increase the roughage portion of the diet c. Reduce the concentrate portion of the diet d. Corn oil. Rich in linoleic acid, which is a precursor fatty acid for the synthesis of PGE series. Gradually introduce 20 mL/kg body weight once a day

2. Stress reduction methods a. House together b. Modify training practice.

Potential role of Fibre-Beet: All the above treatments work around either reducing acid secretion or by enhancing or bolstering mucin production.

There are a number of aspects when dealing with performance horses such as racehorses, showjumpers and eventers; these animals tend to receive high carbohydrate hard feeds as a source of readily available energy.

In this context there is a direct effect at the gastric level.

Firstly, the presence of a high starch meal will stimulate those bacteria present in the stomach and these will produce fermentation products that will increase the acidity of the stomach contents beyond that normally reached with stomach acid alone.

Secondly these diets are not good at absorbing excess acid and this exacerbates acidity in the stomach. As discussed in the previous article these points have two results. Unbound acid can reflux into the squamous portion and the VFA from fermentation can penetrate the mucosa where it can interfere with mucin production etc.

The obvious answer, purely from a health aspect, is to have free access to constant feeding of fibrous material. By looking at individual feedstuffs the ability of some feeds to absorb, and therefore remove from free circulation in the stomach, acid is far greater than others. Acid binding capacity is a measurement of this, at various acidity levels; the higher the value, the greater the binding.

Research has shown that horses grazing have stomach acidity levels of >pH 4 whereas those fed concentrate meals have levels as low as pH 2.

However, it is not always practical for performance horses to be fed continuously and there does need to be some concentrate feeding to supply sufficient energy for activities and concentrates need to be fed in discrete meals.

Work conducted by Andrews (2007) compared feeding bromegrass hay with alfalfa hay and concentrates on stomach acidity, VFA production and incidence of ulcers. The research found that the pH of stomach contents with alfalfa/concentrates was higher, and therefore less acidic, than bromegrass despite higher levels of VFA, and lesion numbers and severity less in squamous mucosa. What was of interest was the effect of this buffering of acidity by alfalfa lasted for 6 hours so it is conceivable that meal feeding of alfalfa can help maintain normal stomach acid levels.

Fibre-Beet contains beet pulp as Speedi-Beet, alfalfa and oat fibre. As such it will have a high acid binding capacity – probable in the order of 400 meq/kg (around 4-5x that of cereals) and so would be a useful additive to concentrate meals. However, the product can also address the other aspect of ulcer control. As discussed above most treatments act either through acid control or by coating or supporting the mucosal layer.

Pectin-lecithin complexes have been shown to help in the reduction of ulcers (Marquez. , 2007). Research by Thirawong et al (2007) looked at the mucoadhesive properties of pectins of various degrees of esterification. They showed that mucoadhesion depended on the pH of gastric mucosa, peaking at a pH of around 4.8, and degree of esterification. Pectins were also good mucoadhesives in the small and large intestine. Hino et al (2013) showed low methoxyl pectins can stimulate mucin production from the small intestine. Beet pulp is a highly esterified pectin that also contains acetylated galacturonic acid. This means that beet pectins also act as their own emulsifiers and so we would expect a good level of mucoadhesion.

We also know that pectins are removed from cell wall matrix in the acid environment of the stomach and are used in parenteral nutrition to support mucosa (Bengmark & Jeppson 1995).

It is logical to assume that in a situation where alfalfa helps reduce the acidity of the stomach pectins can form strong mucoadhesives and subsequently improve mucin production in the small intestine. In addition, the oat fibre provides phospholipids that help the already easily emulsified beet pectin, making a good mucosa fortifier. It is also probable that, due to the nature of gastric motion, gastric mucoadhesion will also happen in the squamous mucosa. If gastric ulceration is caused in this region when acid refluxes into the squamous area, reflux with pectin should also occur.

Fibre-Beet can act as a moderator in the control of ulcers. It can be fed alongside concentrates to help maintain a normal acidity level in the stomach, an effect that can last up to 6 hours from a single discrete meal, and also provide materials to maintain and bolster the mucin layers in the stomach and along the length of the gastrointestinal tract, a characteristic that can counter stress and other behavioural factors.

Fibre-Beet and Ulcers – An Update