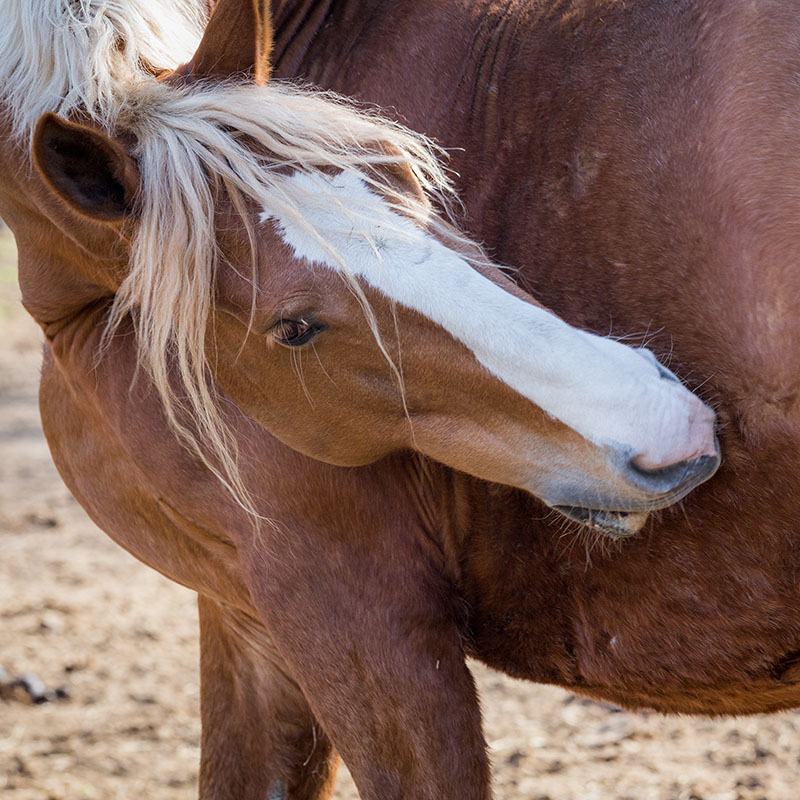 In general terms, colic refers to pain or discomfort in a horse’s abdominal region. Most horse owners are aware of the common signs of colic which may include feed refusal, pawing, rolling, straining, sweating, kicking at the abdomen, and looking at the flanks. Pain may be mild or intense, and some cases may quickly resolve without treatment while others require aggressive measures that may include surgery.

Because many instances of abdominal pain are related to something the horse has eaten or problems with how the gastrointestinal tract in functioning, it’s important to avoid causing a recurrence by feeding too soon after the episode or by offering the wrong type or amount of grain or forage. Feed management after a simple colic case is quite different from the protocol if a horse is recovering from colic surgery.

By some estimates, about 80% of cases can be defined as simple colic. In these cases of abdominal discomfort, often no specific cause if found, routine treatment is successful in relieving pain, and there are no special dietary requirements. There may not be a long period where the horse is off its feed, though food and water should be withheld during the episode itself. After the pain is resolved and there is evidence of normal gastrointestinal function, the usual feeding plan can be continued. In some cases, grain is withheld for several feedings to prevent excess gas production.

In cases where a mass of partially digested forage or grain stops moving through the digestive tract, the mass may become hard and dry, blocking passage of faecal material and causing inflammation and painful spasms. Impaction colic often responds to veterinary treatment, including a regimen of pain management medication and a laxative such as mineral oil. Horses that do not improve after this treatment may need to be hydrated by using a balanced electrolyte administered either intravenously or through a stomach tube. These procedures help to soften the impacted mass and allow it to move along the gut.

Feeding a horse recovering from impaction should not be considered until it is clear that previously ingested material is moving and newly ingested material will not add to the blockage. If the impaction was confirmed by rectal examination, re-evaluation can indicate whether the mass has moved. Horses recovering from impaction colic should first be allowed grass or hay, with feeds being added only after gastrointestinal transit time has returned to normal.

If a horse shows signs of colic, always contact a veterinarian who can diagnose and treat the condition. Waiting to see if the colic will resolve is usually not a good idea, as a case that seems mild can quickly become serious. Each case should be evaluated individually. An equine nutritionist or veterinarian can answer questions as to the time when an individual horse can be offered feed or forage after a colic episode.