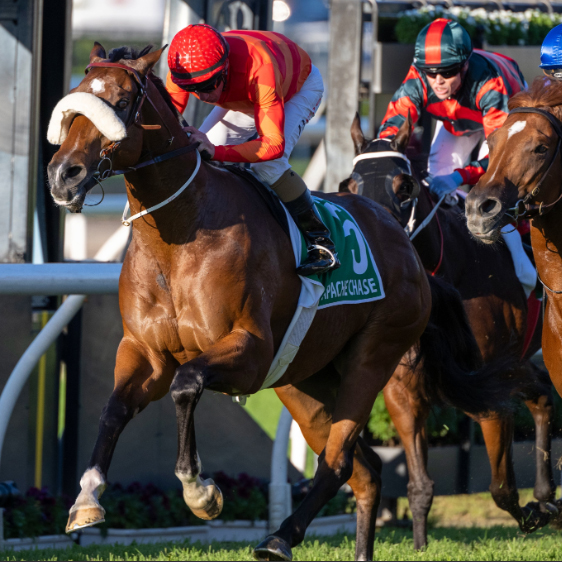 There is a defining image of the recent Brisbane Racing Carnival. A trainer celebrating in the mounting yard at Eagle Farm, resplendent in a pink shirt and panama hat arms held aloft in triumph. The trainer is Desleigh Forster and the image taken moments after her horse Apache Chase had provided her first Group One victory in the Kingsford-Smith Cup over 1350 metres.

The 31st female to train a Group One winner in Australia, it is no exaggeration to say that winning a Group One race at Eagle Farm is a thousand miles away from where she started because Forster learned her trade from the family property at Ilfracombe, roughly 1150 kilometres from Brisbane in the Central West Country Racing district of Queensland.

“From day dot, I have always been around horses; that is all I did, but I did not get into racehorses until I was 16,” Desleigh says. “It was a very good grounding staying in the country.

“You do not take things for granted, I have been very lucky since I moved down here and started training, always having decent horses.

“In this industry, you do not take anything for granted.

“When I was back home, we used to travel four or five hours one way to get to the races. That is a 10-hour day, on top of getting up doing the horses in the morning, as well as a day job.

“It was tough and hard but what I am doing now training racehorses in Brisbane, this is easy compared to life back there. It is way easier, these days we complain about going to Dalby to race a horse, that is nothing like what they do in the bush, some people drive eight hours one way in the country to race a horse.”

While home for Forster will always be Ilfracombe (current population 270), her home for the last 20 years has been Brisbane.

When she was a young girl Forster and her four siblings saw plenty of the Queens with father Henry (still known today as ‘Boy’), a contract drover. Forster dreamed of being a jockey but suffered a broken back as a young girl following a fall from a bolting horse.

Maintaining a family tradition winning the Australian Stockman's Hall Of Fame ride when aged 12 in her first year at high school, Forster is certainly made from different gravy. “I was given a horse as a birthday present and had dreams of being a jockey but a broken back put an end to that,” she says matter-of-factly.

A month spent in hospital in Brisbane did not dampen her enthusiasm for horses however, and as soon as she returned home she straight back on a horses back but decided if she wanted to work in racing it was smarter to be as a trainer rather than a rider.

Wanting to be a trainer in her own right she moved from Central West Queensland to Brisbane in her teens where she worked under leading trainer Barry Baldwin as his stable foreman for three and a half years.

A stint with the legendary Bart Cummings in Brisbane was to follow before she found herself working for leading trainer Peter Moody whilst he was in Brisbane. This was to last four years and through this time Desleigh went to Melbourne to help set up Moody's Melbourne stable at Caulfield.

Moody encapsulates Forster succinctly. "Everything has always been about the horse with her," Moody said.

"She's just a bloody good horsewoman, everything has always been about the horse with her, don't take this the wrong way, the softest part about Desleigh are her teeth, she's always been a horse person before a people person, people that know her would say she can be abrupt but it's the horse first and everything else second.”

Having decided the time was right Desleigh then decided to take up training in her own right and for the last decade, she has been a fixture on the leading trainers’ list with a small stable.

“If I can't be competitive in a sport that I play, any sport, I don't play,” Forster says. “A lot of country people are competitive and I am exactly the same.”

Apache Chase has tested Forster’s skill, the four-year-old wanting to race fiercely as a younger horse.

“He’s settled down a lot, he’s matured more and he’s a bit more relaxed in his races now. Around the stable he’s got a good attitude and one of the quietest horses around. The only time he can get a bit revvy is when the jockey gets on, he know’s it’s game day and he means business.”

Forster is quick to credit stable goat ‘Eddie’ “He’s quite a funny goat really, my secret weapon. All the horses seem to like him. In the old days all the old trainers used to say that goats keep all the viruses away from the stables and I think he has a calming influence on all the horses. They all like him and settle down around him and always happy to see him.

Forster Senior (Henry Forster) still trains a small team from Ilfracombe. “Dad is still training, in fact he had a winner at Tambo on the day that Apache Chase won the Kingsford-Smith Cup and gave me my first Group 1.

And while Forster has now tasted Group One success, it’s highly unlikely she will want that to be the last. “No way.” she says, and who are we to doubt the girl from Ilfracombe.